The man, the medicine ball, and the russian twist.

In the previous post I revealed a startling "Why" in "WHY WEDNESDAY." Yes, Hubs-we'll call him AF (since those are his initials) annihilated my cherry tomato plant courtesy of a medicine ball. The only thing I can imagine worse than this, would be if a meteor came blasting through the atmosphere and landed on the plant. That might be a minor exaggeration for effect, but this event was catastrophic.

I have a small garden. By "small" I mean cherry tomatoes, herbs, a pepper plant, onions (which will probably die), and purple flowers (I have no idea what they are called-serious gardener as you can see). By "garden" I mean 4 pots containing such items. So I am not particularly a BIG gardener, but in my heart I am! After a trip to the Bloomington farmers market in April, I became inspired to plant...stuff. I chose the items that had the best chance of surviving with me as the gardener and a life in a pot. I actually do not care for tomatoes one bit. I love all byproducts of tomatoes, but the tomatoes themselves, in their natural state-no thanks. I just can't get past the texture, and don't even try to give me any sort of sauce with chunky tomatoes in it. Hmm...imagine I should have a child with "food sensory" texture issues...we'll tackle that one another day, or week or month...

Even though I do not like tomatoes, per say, I optimistically dreamed I might just like cherry tomatoes if I grew them myself (no real logic there). After watching my 3 little baby cherry tomato plants grow into teen vegetable plants, I felt fulfilled and excited to see them blossom into ladies-or little sassy tomatoes. Things were great, me happy, plants growing, until a tragedy occurred in the form of AF launching (might be exaggerating) a medicine ball at my beautiful plant.

AF does a new "medicine ball" workout on the deck. He found "the ultimate medicine ball workout" in Men's Health while waiting for a prescription one day. He is on his way to becoming quite chiseled. Basically, I will be washing our clothes on his abs come mid summer. It will do wonders for our electric bill. Anyway, he does a series of "moves." You know, big circles, wood chopper, squat to press, rocky solo, toe touch, 45 degree twist, suitcase crunch, diagonal crunch, standing Russian twist, etc. The "standing Russian twist," that is where all hell broke lose! According to the swore statement by AF, while twisting like a Russian (no this is not a slur I am simply going with the given exercise name as best I can) AF was swinging his arms so passionately for the love of this "move," that he launched the 8 LB. medicine ball directly at exhibit A: My cherry tomato plant. AF claims the ball "slipped" out of his hands while twisting, thus landing in my plant, thus severing one of the cherry tomato plants, thus ending its short blossomless, tomatoeless life. 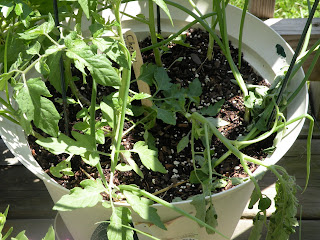 Notice the victim on the far right

After seeing this horror, I confronted AF.
Me: "What happened to my tomato plant? Did something happen when you were outside?"
AF: "Oh, is something wrong? I might have accidentally dropped the medicine ball on it. I thought it was ok though."
Me: "What! Why? How?

That's enough, we don't need to relive this anymore. But seriously ladies and gentleman, does this plant look like a plant that is "OK?" No. If a wrecking ball fell on your head would you be OK! I rest my case.

I admit, I felt sad. Other than this devastating event, my garden has thrived-or at least stayed alive, for over a month. This is a huge achievement and the longest I have kept a plant alive. Yeah...probably don't want me caring for your plants while you are away, or AF and his medicine ball for that matter!

What is the point of this story? There really isn't one. I just thought it was sort of hilarious that my husband smashed my plant with a medicine ball, seriously random. I just thought I would draw this out as long as possible, seeing that I have successful completed this goal, I can probably give it a rest. In all seriousness, AF felt horrible. He asked what he could do to make it up to me, buy me another tomato plant? I said, "No, let's keep this out of court, I'll settle for 5 grand and backrubs for a year."
Posted by A Fuller Day at 4:00 AM

lol OK i do no mean to laugh, but c'mon a medicine ball fell into your plant via a "Russian" move. It has great comedic timing and a perfect blog story too! :o)

Plus the good news is that it is not too late in the season to grow new ones!

Sorry for the loss of your dear beloved tomato plants, i hope they are in cherry tomato heaven being enjoyed as a nice bowl of salsa for God ;-)