Friends on purpose: A Birthology 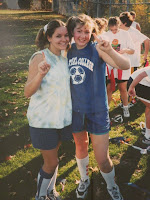 Almost 10 years ago...when umbros and tie die were in (Disclaimer: We were playing powder puff football)!

Just to clarify. This post is dedicated to my BFF on her birthday...well, 5 days late. People write Eulogies when loved ones pass, so I thought, why not write a "birthology" and say a little something about our special person's life while she is alive and can actually enjoy hearing how great she is! Happy Birthday Ang, thanks for being born.

I was born on October 15, 1980. Seven months and 3 days later, my non-biological twin entered the world 2 states away. Though this story possesses the qualities of a Lifetime movie, it is completely and entirely 100% true.

Almost 9 years ago in August of 1999, I was standing on the 3rd floor of Shupe Hall-room 314 to be exact. I was wearing a navy blue tank top from JC Pennys and a khaki pair of shorts (that laced up the front-hot). Angie Marie Mabry strolled into the room sporting a short pair of blue jean shorts, and yellow Tommy tank accompanied by one ridiculous high school boyfriend. We spent an enter day perfecting the arrangement of our room (mostly due to my OCD room organizing affliction where I need to see 45 ways to arrange a room before picking the perfect arrangement of furniture for optimal space maximization). We stayed up obscenely late our first night together, cutting out colored stars to tape around the perimeter of our room and swapping life stories…well, 18 years of life thus far. If it was not obvious from our matching pajama pants, staying up late tendencies, similar music taste, rice loving ways that we would be BFFs; it was blaringly obvious when we both overslept during freshman orientation and missed a mandatory freshman test. We never made up the test and still managed to graduate.

48 hours into freshman orientation, everyone instantly assumed we were childhood best friends, that we grew up on the same street, shared birthday parties, and graduated from the same high school. Jaws literally dropped, and eye brows rose when one of us casually said, “Oh no, we were randomly paired, we just met 48 hours ago.” Actually, that was not entirely true. We did meet over a phone call when I received the name “Angela Marie Mabry” on my roommate assignment slip in the mail. We shared a little small talk while I conducted secret evaluations, checking for brand recognition by throwing out names like “Abercrombie” and “Doc Martins” into the conversation. She passed the test.

96 hours into the college freshman experience, and we co hosted our first party-a snow cone party to be exact. It was BYOI of course, “Bring your own ice.” You might say they were the ultimate freshmen mingling parties. Together, we invested about $10.00 a piece into a sweet hand crank plastic snow cone machine. It broke ½ way through one of these parties when the ice cranking got a little crazy. We actually ran out to replace the machine on the spot. We refused to disappoint our fans. When you are building a legacy, no price is too great!

2 years through college and we decided, individually, to study abroad. One might assume that best friends would travel to the same location, and buy matching “I heart ____” shirts. Since neither one of us was the “follower” in the relationship, we chose 2 completely different locations- China and Jerusalem. I tried convincing Angie to follow me to China, and she tried to convince me to follow her to Jerusalem. Being independent adventures, we decided to go our own ways. We broadened our horizons, stretched open our world views, and experienced life through different eyes.

4 months later we boarded planes, and exchanged souvenirs back on common soil. We shared culture shock, Boone’s farm, the hookah, tears, laughs, memories and stories together about our adventures.

2 years later, we graduated college (2.5 years later for me). We stood in each other’s weddings as we married college roommates, we gave each other “toasts” and pointers on marriage and all that it entails…

5 months into MY marriage (a year for Ang), and we both caught “the pregnancy.” Actually, I caught it first, and then prayed for Angie to catch it. Thankfully God answered my prayer and 3000 miles apart, we both were “expecting”-one boy for her, one girl for me. Through months of food cravings, body changes, swollen ankles, moves across town and the country, and first time mom preparation, we kept each other appraised of the play by play.

9 months later (10 for Angie), we birthed some babies V-style and so together we embarked on a journey into the hood, motherhood to be exact. Instead of taking pictures together, we now took pictures of our miniature people together. Baby O and Baby A even shared a few photographed baths together for blackmail purposes of course. We were neighbors by no means, living 2.5 hours apart, but you never would have known. Our friendship has never been one affected by mileage.

9 months flew by and Angie was surprised with round 2, growing Baby E. Although I did not catch the pregnancy quite as quickly the second time around, I caught my own surprise 9 months after that. We each birthed another baby-2 girls total-Ella, and Isla. We kicked ass going old school all the way-o-natural. No Epidurals here, C-sections not welcome.

2 days into Ella’s sweet little existence and a storm rolled in. Ella had a cleft palette, which made eating extremely difficult and near impossible. A new baby on its own can be an overwhelming experience for a mom. Throw medical issues, and a toddler at home in the mix and you’ve got a recipe for a break down. There were no breakdowns. Moms are the toughest creatures on the planet. My heart ached for my best friend as I watched her take on the unknown, stand up for her baby, and deal with hardships I had not experienced in our non-biological twin existence. Angie taught me about courage, faith, hope, and what being an advocate for your child really means. She refused to be managed or handled. She spoke up when it was necessary, kicked ass if it came to it, and refused to let any terminology, and diagnosis define her sweet little Ella. (Read more about this amazing journey and more over at Angie’s blog)

Almost 2 years later, the lessons I learned from my best friend proved immeasurably valuable when I heard the word “autism” uttered in the same sentence as my daughter’s name. With an extremely high maintenance fussy baby at home and a toddler with developmental delays, I was on the verge of my own breakdown. Bu there were no breakdowns. As I said, before, moms are truly the toughest and most resourceful creatures. After my paralysis at hearing such words wore off, I refused to let fear, ignorance, and possible denial define my decisions and so I dove head first into searching for answers for Aislynn. We scheduled our autism diagnostic and prayed. In the meantime we started developmental therapy, speech therapy, play therapy, eating therapy, and nutrition. Angie and I both lived through days and weeks filled with therapy, appointments, and quests for answers. I don’t think we both ever dreamed we’d have to wear the hardcore mother advocate hat so much in such a short amount of time.

Months passed, and it was hard. We rode our individual emotional roller coasters in the grand amusement park of life. I wanted things to be different for the both of us, for both our little girls. It was undeniably challenging but there was something slightly comforting knowing that we both knew what it meant to have 3 therapy sessions plus, a week and issues the average mom did not face.

Time passed and miracles happened. Ella proved to be just as strong willed and sassy as her mom. They said she would be blind; they said she might not hear, they said she might have major life altering challenges and never meet milestones. But they were wrong. Ella sees, she hears, and she is conquering those milestones. She doesn’t swear, but if she did I think Ella would say “Take that bitches! Put that in your pipe and smoke it!” She recently turned 2 and has been through and conquered more than most people will in a life time. She’s been through hospital stays, surgeries, therapies, and tests, all with one amazing activist and mom at her side. I have no doubt in my mind that Ella will continue to defy the odds and show everyone up. I am honored and proud to say, “Hey see that girl over there…yeah, the rock star mom with the fire cracker for a daughter, she’s my best friend.”

In March, 2008 I heard the most amazing words, “Your daughter does NOT have autism. “ Twins are supposed to share everything, even non-biological ones, so why not share some miracles. It was as if I could breathe again after holding my breath for months. Those were the words I truly in my heart wanted to hear, and I prayed I would hear, and then I heard them. Aislynn continued to receive all her developmental therapies and made great progress. She still goes to speech and has some sensory issues with food, but we have done a 180 like I only dreamed was possible.

Today I can hardly be surprised that 2 sweet and spunky littler girls with us for moms should defy all odds. I know you might be questioning if this is start of a screen play for a Lifetime movie, rest assured it is not. I cannot promise however, that you won’t see this story in a book someday coauthored by the two of us! I don’t believe in coincidence. Random things don’t just happen, and Angie and I were not randomly paired for roommates almost 10 years ago. I know what you are thinking, “Wait a minute! You said at the start of this life synopsis you were randomly matched for roommates?” But I looked up the word random: “lacking any definite plan or purpose.” It IS true that no one in the Bethel admissions office knew what they were doing when they paired the two of us. They saw we both were left handed and liked to stay up late and thought, “Why not!” I told people for years that my best friend and I were “randomly” matched for college roommates. But that’s not true. From day one to day 3,650 our friendship has never been random. It has NEVER been “lacking any definite plan or purpose.” It is the opposite of random, full of purpose.

that is awesome! what a present! I can't believe you remember all that so vividly and with so much detail!!!

What an awesome friendship, and what amazing moms you both are! I'm so glad to know you, Brooke, and I really enjoyed reading this. Thanks for posting it :-)

What a great synopsis! Rock star moms, for sure!

Thanks everyone :) It is quite amazing that I actually able to shave down almost 10 years. Especially since I usually have a lot to say!

great story... you two are truly meant to be BFF's for life. wishing you nothing but many more years of stories to tell :o)

What a friendship--I'm jealous and afraid that I'll never have that in my lifetime! You guys are amazing, thanks for sharing.