There are times as a parent, where the kid inside of you floats to the surface. My "kid" moment started Thursday when a friend said we should come see her ducks. Immediately I thought, sure, kids love feeding the ducks outside...What she actually meant was, "You should come see and play with out 2 live pet ducklings living in our house!" I started feeling "kid-ish." 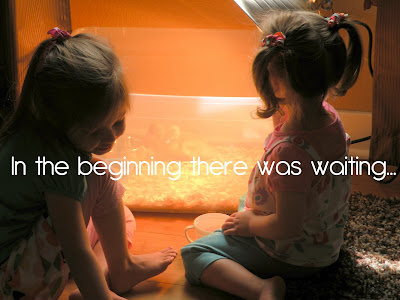 Being the cruel mother that I am, I told the girls they could not hold the ducklings until their toys were picked up. They opted to sit and stare longingly at the ducks for awhile before beginning, what appeared to be a painful process, of picking up toys. 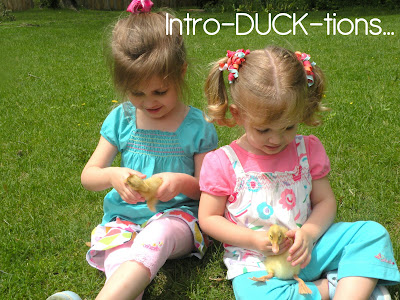 Meet "Sam," (Aislynn's) and "Ming Ming," (Isla's). Aislynn wanted to name them "Pam" and "Sam," but being a gracious older sister, allowed Isla to name her own duckling. 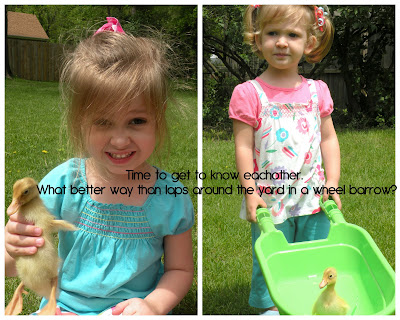 Our ducklings became well acquainted with being carried around in a bucket, swimming in our water table, wheel barrow rides, and more... 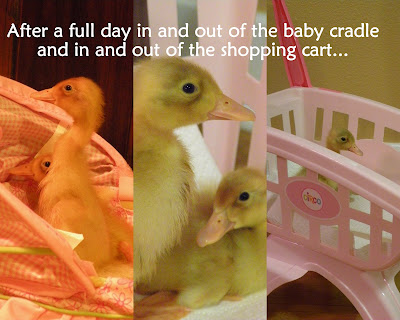 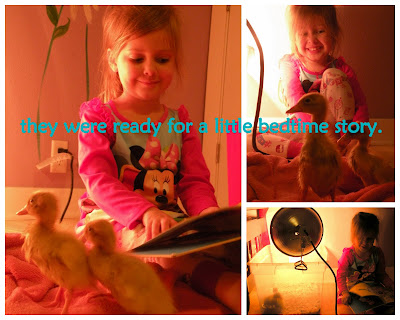 Aislynn read them a book, sang them a song, and put them to bed.
Rest up little duckies! You'll need it for tomorrow.
Perhaps our new friends will fly away sooner rather than later after a week with us!

Wow - you have made having ducklings so appealing! I mentioned it to Nick last night and he did not have the same response as Andy. He looked at me like I asked him for a giraffe! We will try and see them today!

this makes me smile. your little sweeties are probably going to talk forever about the time they had ducks. if grant wasn't so young i would go buy some right now, cora would flip out! i love the idea of temporary pets, too.

Those ducks have pretty fragile wings; if you want them to swim away and fly south, make sure the girls are careful!

What a great idea. We had temporary duck pets once too. And yes, I still talk about it, 30 yrs later.
Thanks for sharing and bringing back great memories! Make sure you will the bath tub at least once for them. Well worth the splashing mess it makes.