Computer, you complete me...

I came to the realization over the past 2 weeks that I am half human, half robot. I learned this after finding it extremely difficult to function as a human without my computer. Yes, I am that lame.

2 weeks ago my computer suffered a stroke and died. Cause of death? Undetermined. It is still too painful and too fresh to go through all the details. All I know is my computer completely shut down, I panicked, tried to shock it-well not really, that would likely result in a fire-but I practically gave it mouth to mouth while screaming, "Don't give up on me...I love you!" Ok, that might be a slight exaggeration, however this tragedy occurred at roughly 1:25am (Eastern time) and there were no conscious witnesses.

I spent HOURS the next day on the phone with I kid you not, THIRTEEN different HP/Tech/Tormentors. I was at about my breaking point when this conversation ensued:

(After already being forced by one phone tech to attempt to do open heart surgery on the computer tower, 10 techs later, and 6 hours later...)

*This conversation is real and actually occurred as stated below.

Tormentor: "Ma'am, please try to unscrew the screws that are attached to the side panel of the tower-"

Me: "NO!!!! I am NOT going through THAT again! No! I do not want to take apart the tower, that makes me feel very uncomfortable, I have a warranty!"

Tormentor: "Ma'am I need you to first-"

Me: "NO! The other guy already made me do that. He had me unscrew the panel, look inside and try to remove parts that would NOT come out. I do not have a screw driver that small! I am not a computer technician, I have a warranty! Why can't someone else take care of this problem!?"

Tormentor: "Ma'am I am trying to help you with this problem, but first I need you to tell me what you saw when you opened up the computer. What did you do?"

At this point, Akael got sneaky, he started asking me if I did this or that when the tower was open...and, could I try to trace the bundle of wires attached to the mother board?

Wait! WHAT THE? He was trying to get me to take parts out of the computer again? I felt like I was in some sort of weird technology horror movie. I could just see all the bored computer technicians gathered around Akael's computer screen laughing hysterically at my almost mental breakdown. "Tell her to gently pop out the fan! Haha! Its screwed in! Haha! She'll feel like a dumb ass! Haha! Tell her to put her computer in the toilette! Haha..."

Although I was VERY near jumping off a cliff...or the couch, I indulged Akael as he gave me a crash course in mother board 101, computer lingo, and the hard wiring of a HP Pavilion Slimline. I could really give a sh** about all that, but if it got me to that beautiful point in the conversation where he would ask me for my warranty info I would endure.

I will spare you the gruesome details and the horrific things he made me do with the wires..unlatching wires..reattaching wires...all sorts of mad scientist stuff. I'll just bring you in to the end of the conversation, otherwise known as my full technology mental breakdown. 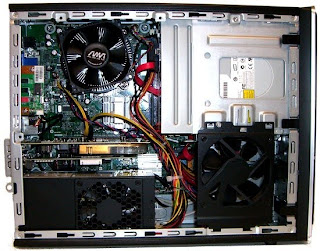 Me: "I CANNOT DO THIS ANYMORE!!! I HAVE BEEN ON THE PHONE FOR HOURS AND TALKED TO EVERYONE WHO WORKS AT HP! I DO NOT UNDERSTAND WHAT YOU ARE TALKING ABOUT! I DO NOT WANT TO DO THIS! I HAVE A WARRANTY! WHY ARE YOU MAKING ME TRY TO REPAIR MY COMPUTER. IT DIED ALL THE WAY LAST NIGHT. THERE IS NO GREEN LIGHT OR YELLOW LIGHT ANYWHERE!!! AND I FEEL VERY UNCOMFORTABLE LOOKING INSIDE MY COMPUTER! I DON'T EVEN THINK WE ARE LOOKING AT THE SAME COMPUTER!! I CANNOT TAKE THIS ANYMORE! I HAVE A WARRANTY!!!!!

Me: "I am not an idiot! I actually know how to use a computer pretty well. But there are major idiots out there who own computers! And I do not believe you make all of them open up their computers and take out parts. Half of those idiots don't probably even own a screw driver or know how to use one. Why are you making me do this? AHHHH!!!!!!!!!!!!!!!!!!"

Akael the Tormentor: Pleased that he had seen me crack. "OK Ma'am. I just need you to do one more thing for me. Screw the side panel back on and reattach the computer to the monitor and the power source and try to turn it on."

Akael the Tormentor: Please Ma'am, can you do this for me and then tell me what happens.

After indulging Akael, I attempted to turn on the computer. Guess what happened? NOTHING!!! Just like I knew was going to happen roughly seven hours before that. When you see your own computer die before your own eyes, you know when its dead and its not coming back.

Akael's response to this: "OK, so it appears there is in fact something wrong with the town and it is not the monitor. I will now take down your information and someone will call you in the next 24 hours with further instructions. A box will most likely be shipped to you and you will mail in your computer tower in this box for repair."

What is this, mission impossible? At this point I was able to step away from the ledge. It only look 7 and a half hours and 13 people to get to the warranty info. I looked at my "HP care pack services" packet and now understood what the "In-home repair service" meant. I also scoffed at the picture on the cover with a grandfatherly man helping a family understand their computer problem.

Long story short:
Our computer is home safe-after being delivered in a not so safe box with little explanation of anything. I do know he had a heart transplant-AKA-the hard drive was replaced. On the plus side, I am thankful we actually had a warranty and did not have to buy a new computer. Although, I was seconds away from shouting, "Screw you Akael! I am going to the Apple Store! Take your HP Slimline and shove it!" On the minus side, I am very sad that none of our pictures, music, or documents could be recovered...or so they say. They are tormentors over at HP so who knows...

I don't know that I will ever get that image out of my head of my computer fully open and exposed, mother board and all, but I will try to heal and back up everything while I am at it! Oh, wait I currently have nothing to back up.

Going for the dramatic finish.

PS: I have also learned I do not need a computer to complete me.
Posted by A Fuller Day at 11:15 PM

uh, hmmm... yeaaaaah. You should have told HP tormentor to shove it right from the start. i feel for you. i learned YEARS ago to always buy from a store (best buy) because they do all of the "dirty" work for you and there is NO (as in never-ever) a phone conversations from beyond the dark side. You Walk into their store, explain in small detail that it is broke... walk away, they call you when it is fixed.

sorry you lost all of your stuff. i could compile a CD with any images i have of your family from when i did see you guys? it isn't much, but its something.

also, 1. invest in an external hardrive - back up daily. 2. pay the $25 a year for a flickr account and upload, upload like a crazy woman! i keep ALL of my favorite images on my account. this way no matter what breaks, i have them (FULL SIZE) on my account and can get them back if need be. 3. never buy from an online store, never-ever-ever! once you relenquish your computer in that mail-away box, they automatically trash the hardrive. At least at best buy they try as hard as they can before sending it off to restore files and back them up. i know this from several experiences with bad HP computers. Probably why i use a Mac now?

I totally feel for you and completely agree with Michele...

As for your tormentor... try not to blame him. He's required to make you do all that stuff. If he hadn't, his supervisor would have looked over the ticket and said "Did you make her do A? What about B?" and then he'd have to call you back and make you do them before it was all done. It's not his fault.

I don't fully blame the Tormentor. I realize he was taking a bullet for HP. I do have a problem with the false advertising of my "HP Services Care Pack." It definitely did not feel like "Service made simple." I still stand by my "What if I was an idiot without a screwdriver senerio."

You need to call them and see if you can have your old hard drive back. I know you don't want to call them, but you need to demand they send it to you. YOu can probably still retrieve your pictures and documents. Our hard drive crashed and we were able to hook it up as a slave drive and save all of our pictures.

#1 rule of computers - if you OPEN your computer, you void your warranty. Luckily HP was telling you to open it...

are you now a certified computer repair person after all of that?

it took me years of training on how not to damage electrical components... you're lucky you did not damage more by shocking it.

unfortunately, your hardrive was an easy back up, but HP goes for the quick fix and not customer satisfaction. Your hardrive is somewhere in a pile of other hardrives - trashed. there is a very slim chance of getting it back.

this was sad and really funny at the same time. funny how you said it all....all else sad, sad, sad.

how infuriating. I'm pissed just reading all you went through.

We all have one of these moments sometime. I had one when I lost the first 6 months of Ella's life! I really needed those pics b/c I didn't remember any of it! Sam was able to find all but 1 month eventually.