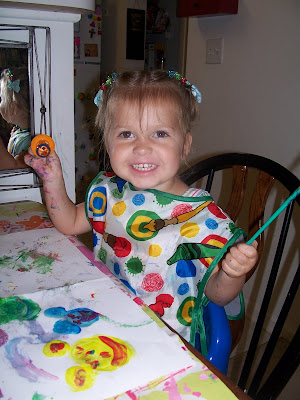 "Its all in the eye of the perspective." The wise words of a high school ex-boyfriend. Actually, they are not wise words at all. In fact, they make no sense. I just can't seem to forget Thomas declaring these profound words. I don't even remember what it was in regards to, but I do remember saying, "That makes no sense!" And him replying, "You just don't understand." Now I can't help but laugh whenever I hear the two phrases "It's a matter of perspective" or, "It's all in the eye of the beholder." I came to the conclusion a very long time ago, that I was much smarter than Thomas Yates.

I decided it was time for a change of scenery after it became clear that Isla had a one track mind-climb on top of Aislynn and anything she is playing with. Aislynn had a one track mind as well-whine and yell "no!" over and over any time Isla looked in her direction. I decided to move Aislynn up to an elevated level that would be out of the reach of my little climber. I set Aislynn up to paint at the table, "just like in Miss Mouse's Day," she excitedly pointed out. She was very excited, and began painting away. I sighed a sigh of relieve to have a whine free moment. Which was quickly brought to an end by Aislynn whining about Isla grabbing at her (Aislynn's) feet from under the table. Did I say one track mind! Sure enough, Isla had strategically found a way to still get a hold of her big sister from under the table, she was more than happy to at least have a hold of her big sister's foot.

It was at this moment I realized how much my perspective had changed and how I needed to "see more clearly" or "look through" this situation just a little harder. Months ago, I remember waking up and going to bed thinking of activities I could do with Aislynn to help her with expression, and interaction. Instead of looking at the annoyances, I needed to see the lining around this picture. I have a little girl who whines. A little girl who is aware of her surroundings, her sister, and a whole lot more. 7 months ago we thought this little girl might be autistic. And my biggest fear was that she would not be able to express herself to me. Well these days she makes her feeling very clearly known, both good and bad! Including the feeling "Mom no sing." which was declared today in the car as I was forbidden to sing along to any and every song. I still think whining and complaining is unpleasant, but it is an encouraging reminder at how far we have come. Yes, whining can be an encouragement at times. And my littlest peanut Isla, that wants to be into anything and everything as well as on top of everyone-I am so thankful she is healthy, and mobile, and curious. She is full of life and enthusiasm and I can only imagine what she has in store for us.

I am realizing that a different perspective can breath fresh air into a situation. Even situations that are little and you think are easily perceived, and especially situations that are difficult to perceive. And so today I will try to "look through" all the areas of my life and things I am facing both big and small and see what I can see more clearly if I just shift my perspective.
Posted by A Fuller Day at 12:18 AM

sorry, i've been so busy i keep forgetting to keep up with all of my blogging comments.

it is so great...perspective. It is hard to get a handle on it some days. You get caught up in the moment of "AH, will this chaos never end" and then if you were on the outside looking in...it wouldn't seem so bad. It sometimes can be hard to take a deep breath, step back and re-evaluate the situation. As a mother you are always IN the moment. You hardly ever get to step back and just see the moment. It is nice that you were able to do that :o)

We miss you guys!

Wonderful pictures! What a great looking family, be proud :)